It's time we put an end to women's portfolio abuses. This book tells how!

For the undistinguished investment firm of “Stuffem and Churnem” there is no greater gift than the lady investor. It is unlikely that she had the time or inclination to learn the fine points of how and why investment markets work when young so she is a constant source of easy pickings for Rodney Redsuspenders their top producer. In a real situation a Rodney took a widow's $5 million inheritance to $3 million with only 47 trades in one year. It was a sensation. The Ontario Securities Commission ignored her complaints as did IIROC. It took the OBSI to get her any recompense.

There are no hot tips or magic formulas in this book. This book tells ladies what is on sale, from whom and why. The ladies of this world can spot old fish, shoddy clothing and other unacceptable offerings. They need only to take those same learned skills to the investment markets to avoid buying garbage.

Like all good Canadians you are deep into tax avoidance stuffing your RRSP and TFSA not to mention a few other avenues open to all even journalists and socialist. But then you start to worry, didn't the government steal all their stuff from the Canadians of Japanese descent in 1940? Or what year was it they stole the Ukrainian's stuff? Was it 1915 or 1917? What if you've got it all saved up and it gets stolen?

That and paying 65 percent tax on his income pushed Angelo out to sea. He found a way that he could retire from tax paying and worrying about the bandits stealing his stuff. When his buddy came to Barcelona he met a newer, younger, happier and richer man.

If you have ever thought about getting away from it all this book is a must. If you have been offered the opportunity to work outside of your country of residence it is time to kick back and read about all the wonderful opportunities that could arise for you. No waiting in emergency rooms for you. You move to the front of the line. Your children will go the best schools and you'll have an ironclad pension. It's like being a Canadian Senator!

Ever wanted to join Queen Elizabeth II, the Bronfmans, Irvings and Martins offshore? This book is your manual on how to do it.

Alex Doulis' 2nd book, has now been give the CRA's blessing. The publishing of the Paradise Papers revealing the offshore structures of 3,000 Canadians has lead to an astonishing zero pursuits by CRA because the structures are all legal. Sorry all you lefies out there.
Click to view.

To quote Zorba the Greek "Wife, house, kids, the whole catastrophe". If you have the whole catastrophe but ever wondered about growing old in the dark in a hovel with a high pasta diet (no sauce) then you should consider how you can shield your assets from theft. The thieves you have to worry about wear suits and are armed with writs.

They will relieve you of your assets and earnings faster than any highwayman with a pistol. Stewart, the hero of "My Blue Haven" had such worries. He could see that government would never be able to keep its promises of health care and old age  security any better than Bernie Madoff could pay his investors. He therefore started on a pursuit of financial independence and freedom. He adopted the golden rule: "He who has the gold makes the rules". Not for Stewart to give his assets and earnings to some guy in government to give back in his old age after the senators, MP's, welfare  mothers, girlfriends et al are paid . No, Stewart will be in control. How? His story is in "My Blue Haven" and it will tell you how.

Read this you'll understand that prostitution is legal in Canada and who the hookers are.

Alex's exposé of the good old? bad old? days on Bay Street when the ethnics knew they belonged in the cage.
Click to view.

Why do the stock salesmen have fancy yachts and their clients have dinghys? Or why did God create discount brokers? Or was it God? Do you believe that “front running” is an Olympic event? Are there any stock “brokers” left in Canada. Why is there no Bay Street firm of “Ching and Chong”? How did the largest investment dealer in Canada of the 1950's get that way? It's actually very easy, just Ask Alfred E Ames. These and other truths you weren't meant to know about the securities market are revealed by a man who was there. You'll laugh, you'll cry, you'll want to see the movie.

As Tom Caldwell of the eponymous investment firm said, its the best history of modern Bay Street.

Try reporting your sleazy stock broker to your crooked regulator. Lot's of luck.

If you are counting on the Ontario Securities Commission to safeguard your investments think again as it is a criminal organization. This could impact your retirement.
Click to view. 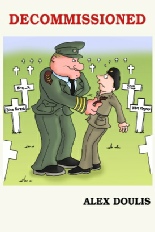 The Ontario Securities Commission, like all regulators, is now a slave to the regulated. Instead of protecting you, it protects its clients the big bank's brokers. To make matters worse the remnants of regulation of the industry in Canada has been taken over by the broker's regulator, IIROC. That's right, like the police overseeing the police. This has left the OSC underemployed. To make ends meet it has taken to extortion, a criminal undertaking using criminal methods. Their rap sheet would make the mafia proud. How about fraud, coercion, obstruction of justice and theft as a career? One lawyer and one investigator managed to commit all those violations in one case for which they had not received a complaint but were acting in the “Public interest” in other words a fishing expedition. You could be the next victim of a fishing expedition because of the underemployed looking for diversions and they will commit crimes against you.

This book exposes how the Commission uses criminal activities to exploit their victims. So informative is the book that they secretly copied it on to the OSC's computers and circulated it as a manual. You could be their next victim as they need neither a complaint nor evidence to convict you. To protect yourself obtain their manual, “Decommissioned” for free from the OSC at jfeasby@osc.gov.on.ca or send me ten bucks and get a legal copy.

You won't beat the stock market. It'ss time to look at alternatives.

Alex Doulis' smash hit which answers the question “Do you really want to be rich?”.
Click to view.

Nobody has gotten rich trading the stock market except your broker. When did you last hear of the speculator that traded their way to a fortune? There are people like Warren Buffet who flip share positions every twenty or twenty five years but they are an exception.

Remember it was Einstein who remarked that the only magical thing is this world was compound interest. Learn about the magic through, “The Bond's Revenge”.

Learn the functioning of the CRA, how the business operates.

Alex's fourth book details the workings of the CRA. He goes into their business model and what you need to know to protect yourself.
Click to view.

Ever wonder how people get selected by CRA for an audit or investigation? Do you know the difference between the two? Has anyone in Canada been convicted of tax avoidance? What about tax evasion? Read of how the Tax Act has been abused and criminal acts performed by your own tax department in pursuit of the taxpayer. Learn about the CRA's stud pool and their demands for pillow talk. This book could literally save your life and you wont die from their attentions as Ms Stephan did. Learn the martial art of taxation self defence and have an enjoyable read.